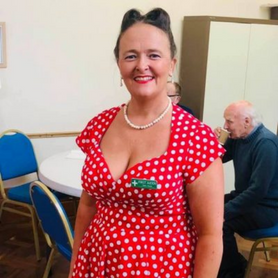 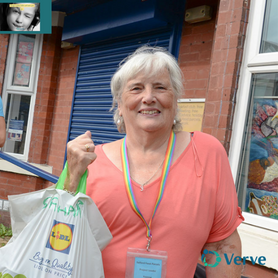 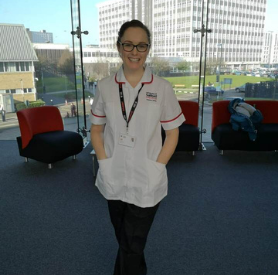 Claire Marie Street has volunteered in the Armed Forces Sector for many years. As an Armed Forces Veteran herself, she is much-loved and well-respected within her community. Claire is a Salford Veterans Community Centre director and the Naafi kitchen Breakfast Club based at St Thomas’s Church, Salford.

Claire works with a team of fantastic volunteers to fundraise and provide emotional and well-being support to Armed Forces veterans in Salford. The team have regularly delivered free home-cooked meals for Veterans in isolation during the pandemic. They are bringing not just food but also a familiar face to offer a feeling of belonging, especially to Veterans who may go for days without seeing a familiar face.

Yvonne Simms set up Salford Food Parcels Charity and the Holiday Hunger Project in Salford over ten years ago, and Yvonne is a much-loved and respected member of her community. Yvonne works from the Emmanuel Church on Langworthy Road, Salford providing food parcels to those in need every Wednesday and offering emergency food parcels whenever needed. Yvonne and her volunteers have worked tirelessly throughout the pandemic. Working together with the Red Cross, they have supported asylum-seeking families and refugees in Salford to access the support they need to stay safe.

Yvonne never stops caring; she was the inspiration for many of our campaigns that have brought much comfort to families, Mums and their babies, and the Swan team at Salford Royal with the Bereavement Blankets knitted hearts and teddies campaigns. Yvonne works with many families in need and helps them with not just a food parcel; she brings a sense of belonging to families in her community, providing advocacy, getting voices heard and bringing about positive change.

Yvonne and her team never stop caring, and I will never stop writing and campaigning to support Yvonne and the wonderful work she does.

Yvonne Simms – Our Christian Faith and the miracles we needed.

Maxine Casey is in the third year of her Degree in Nursing at Salford University, proudly supporting her beloved NHS whilst supporting many families and foster carers within her community. Maxine has worked in palliative care in her community for 16 years in the district of Salford and is a familiar, smiling and caring face to help when people need it most.

Verve has created campaigns to support vulnerable families and people in our community during the pandemic, and Maxine has delivered these to many charities and families in need. With her ready smile and putting others first attitude, Maxine ensures that babies are kept warm, and she will bring comfort to those who need it most.

Maxine never stops caring and provides emotional and practical support, alongside delivering knitted baby clothes and toys to foster mums and mothers and babies in her community. Maxine’s kindness and understanding of the daily struggles that Mum’s feel, especially during the pandemic, is lovely. And, as a young Mum herself to two beautiful children, she knows what’s what, and she gets out there and makes things right.

Bronagh Louise Howell is a retired paediatric nurse who worked within her beloved NHS for over 25 years. Bronagh is also a Mum, her daughter is a teenager now, and Bronagh is dedicated to supporting vulnerable children in care. Bronagh was in the care system when at 14 years of age, she had put up with enough emotional and physical abuse from her toxic home life and put herself into care. Bronagh was lucky; she had fantastic foster parents who saw her through University and enabled her to get her Nursing degree. Bronagh knows that when fostering is done right, it is amazing. However, Bronagh also knows of the daily struggles children face, especially with mental health, and she campaigns daily for change to support children and young people. Bronagh proves that with determination, tenacity of spirit and empathy, we can achieve anything.

My Foster Carers gave me a future filled with love.

Child Abuse and the Good Hidings I lived with…

Child abuse; the Highest Reasons for Vulnerable Children in Care.

If you want to find out more about what we do, or want to do it with us, please, get in touch!

Copyright © 2022 Verve Recruitment CIC.
We use cookies on our website to give you the most relevant experience by remembering your preferences and repeat visits. By clicking “Accept”, you consent to the use of ALL the cookies.
Cookie settingsACCEPT
Manage consent